When I started showing art in the 80s, I was mainly concerned with “sending a message.”  Now, some 30 years later, I am more concerned with creating relevant work that is interesting to the viewer and intellectually challenging to produce. While I am still very interested in the abstraction of the form and the interplay between pattern and color, I find myself less interested in communicating a literal story.

I would say that my present work represents my search for balance and contentment within the visual noise of modern life. So maybe in my life and art I have become less interested in the process of communicating and more attracted to the ability to understand.” 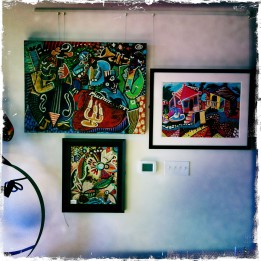 T.Scott grew up in the Southern states of Florida, Kentucky, and Texas. From a young age he realized he had and interest and a gift for the visual arts. With his family having a rich background in the arts his gifts were nourished and evolved to what they are today.

There is a certain “craftsmanship” and naiveté to T.Scott’s work that comes from his early interest in Folk Art, Cubism, and American Handicrafts. Growing up in Florida and Kentucky T.Scott was exposed to the beauty and spontaneity of Southern Folk Art. While pursuing his degree at the University of North Texas he became very influenced by the philosophies of the Futurists and the abstraction of the Cubists, as well as the Pop Art studies of both Warhol and Haring.

T.Scott’s work has been described as being a true continuation in the study of Cubism with a whimsical mixture of the color and pattern of Pop Art. His work has been featured in galleries and collections throughout the United States. T.Scott resides in Frisco, TX where he lives with his lovely wife, their two sons and their wonderful Pomeranian, Foxy.

You may see more of T. Scott’s work at www.tscottstromberg.com.

What do you think? Cancel reply